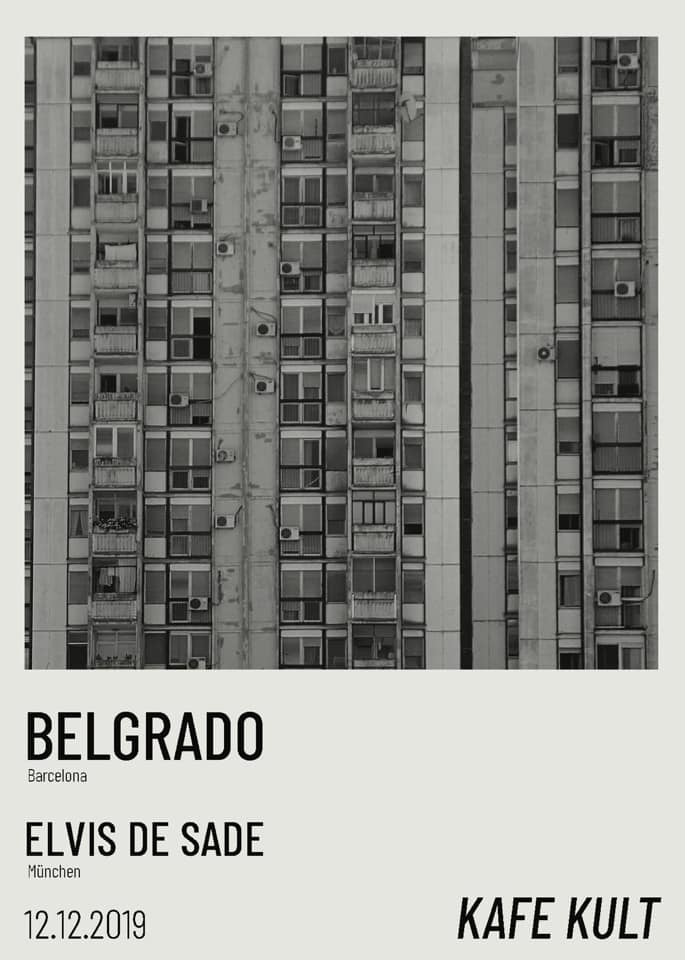 Formed in 2010, Barcelona-based outfit Belgrado has existed at the innovative forefront of the global post-punk scene. Now in their ninth year, the quartet continues to play at home and abroad, carrying with them a reputation built on three full length albums and an impressive touring career that has taken them to all corners of the globe.

Emerging from the DIY underground of Barcelona, Belgrado initially traded in a stylish mixture of post-punk tropes that could be traced back to the Europe of the early 1980s. Following the release of their debut LP (2011), the band embarked on an extensive touring schedule of Europe and North America.
As the group progressed onto their sophomore Siglo XXI (2013) the sound became distinctly more streamlined, elegantly incorporating a colder element, and ultimately marking them out as true frontrunners of the genre.
Further touring ensued including a month-long expedition to Latin America in 2014, performing in Brazil, Argentina, Chile and Uruguay. But it could be argued that their latest LP, Obraz (2016), really demonstrated what the band is capable of. Sophisticated yet accessible, different to their previous work but still noticeably Belgrado. The LP saw the group branch out into territory clearly influenced just as much by psychedelia, dub and exotic rhythms as they were by the now familiar canon of cold wave and post-punk classics. Following the release of Obraz, the four-piece once again set out on the road, playing dates in the USA, Mexico, Japan, South-East Asia and Australia, as well as a series of European festivals. In 2019 they toured South America for the second time, doing sold out shows in Chile and Brasil as well as playing in Perú for the first time.Musically, the band is equally the sum of their four distinct parts.

The machine-tight drums retain an expressive quality which drives the band forward as its rhythmic engine in propulsive dance. Atop the percussive motion, smooth bass lines dictate the harmonic language of the songs, whilst the guitar ricochets and echoes textural motifs high above the rest of the music. In the open space between the guitar and the bass, the voice (sung in the singer’s native Polish tongue), often rhythmic and repetitive, lulls to and fro in a trance-like state. The resulting music is uptempo but dreamlike, danceable but serene. In their lyrics, the band touch on themes such as that of an automatic world in acceleration, the darker side of a world moving forward technologically and the social alienation that brings, the omnipresence of the image (‘obraz’ in polish) as a tool of social control in a world filled with spectacle, and an ever growing blur between the discernibly real and unreal.

Aesthetically, the group take influences from the vanguard of 20th century art movements suchas Dadaism, Constructivism/Suprematism, and the Bauhaus School.
Most visibly represented in the artwork of their records, posters, videos and merchandise. Notably, their visual aesthetic is a collaborative effort from amongst the band’s members.

Whilst based in Barcelona, Belgrado’s membership is a blend of transplanted Venezuelans, a Brit and a Polish woman. This cultural collision of rectangular post soviet buildings and grey skies with a Caribbean sensibility inevitably informs their sound, as does thecity of Barcelona, with its mediterranean backdrop and cosmopolitan multiculturalism.

Post-punk, wave and gothic band currently living in Munich. By use of the arts they’re aiming to break open rational thinking and search for ecstasy and the very other. Facing the abyss and depressed due to murders of the past and the current state of society, they’re still craving for something completely different: An association of free minds with endless possibilities. A hedonistic answer!